After another anomalous summer across the United States, particularly across the West, we here at ForecastWatch took a look at how summer temperatures have been changing over the years in 18 cities across the United States – at least one from each Census Division  in the 50 U.S. states plus Puerto Rico. The cities we looked at were Fairbanks, AK, Honolulu, HI, Portland, OR, Los Angeles, CA, Phoenix, AZ, Denver, CO, Kansas City, MO, Minneapolis, MN, Dallas, TX, Nashville, TN, Chicago, IL, Columbus, OH, Portland, ME, New York, NY, Washington, DC, Charlotte, NC, Miami, FL, and San Juan, PR. We then fitted the best linear regression line through the temperatures for all cities since observations began in each location. The first year of observations ranged from 1869 (New York) to 1944 (Los Angeles).

While a linear regression line is not the best way to look at changing temperatures, particularly if changes may be more in a sinusoidal or polynomial fashion, an exponential change, or if very early years or very late summers may be anomalously hot or cool even for the average at that time, it is a quick and still reasonable way to look at temperature changes assuming that they change linearly amongst all cities. For the purpose of our quick analysis, we defined summer as June 21 through September 22, from the summer solstice to the autumn equinox. It’s important to note that because this is a 94-day period each year, even one summer is enough to average out any changes in weather patterns for that given summer.

However, varying rates of warming (or cooling) in different periods of time between 1869 (when New York’s records began) and 1944 (when Los Angeles’s records began) could affect comparisons between cities, especially when looking at linear regression. So looking at linear changes in average summer temperatures only since 1944 – when all 18 cities have observations – Phoenix still comes out on top, but this time with a relatively significant increase in temperatures of 0.888 degrees F every 10 years. Thus in the last 78 years, since 1944, Phoenix’s average summer temperatures have warmed by 6.93 degrees F. Portland remains in second with an average increase of 5.27 degrees F since 1944, and Fairbanks is third with an increase of 3.64 degrees F since 1944. San Juan, Portland, ME and Washington, DC also have seen increases between 3.2 and 3.6 degrees F. Most of the remaining cities have seen average summer temperature increases between 1 and 3 degrees F since 1944. The exceptions on the lower end are Chicago (a 0.09 degree F temperature decrease since 1944) and Kansas City (a 1.95 degree F temperature decrease since 1944).

So what may cause differences in these average temperature changes over time? One thought may be differences in moisture content: the West, including the Pacific Northwest, is much drier then the Eastern U.S. in summer, and the drier air is easier to heat. Because of the extended large drought in the Western U.S., this is a theory about why recent years have been able to heat more quickly in the West with extended periods of upper-level ridging in the atmosphere. It has been shown that the West is warming more quickly than anywhere else in the U.S. and potentially even the world. This could explain why Phoenix and Portland are seeing by far the quickest warming of the cities analyzed here, and some of the cities in the more humid Midwest/Southeast such as Kansas City, Chicago, Columbus, Nashville, and Charlotte are seeing some of the slowest. However, even if true, it wouldn’t explain all the differences, as humid places (with consistently moderate to high dew points) such as Honolulu and San Juan are also warming more quickly than others on the list.

The following graph shows annual summer temperatures and linear trendlines for four cities that exhibit the greatest increases (Phoenix, Portland, OR, Fairbanks, and San Juan) and four that exhibit either decreases or the smallest increases (Chicago, Columbus, Kansas City, and Charlotte). 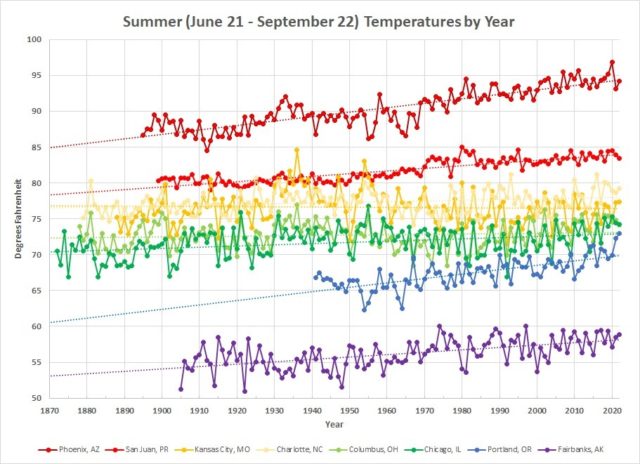 The dark red and red colors are Phoenix and San Juan, respectively, while the blue and violet colors are Portland, OR and Fairbanks, respectively. These four cities showed the largest linear increasing trend in temperatures. The orange, yellow and green colors showed the smallest increases or slight decreases: light orange is Charlotte, the darker gold is Kansas City, the light green is Columbus, and the dark green is Chicago. Interestingly, those that have the highest and lowest temperatures exhibit the greatest increases (though that’s not universally the case; Portland, ME and Dallas were generally on par temperature-wise with Portland, OR and San Juan, respectively, but did not exhibit as large of increases).

This analysis generally matches results of others from Climate Central and NOAA’s difference between 30-year normal maximum summer temperature datasets. 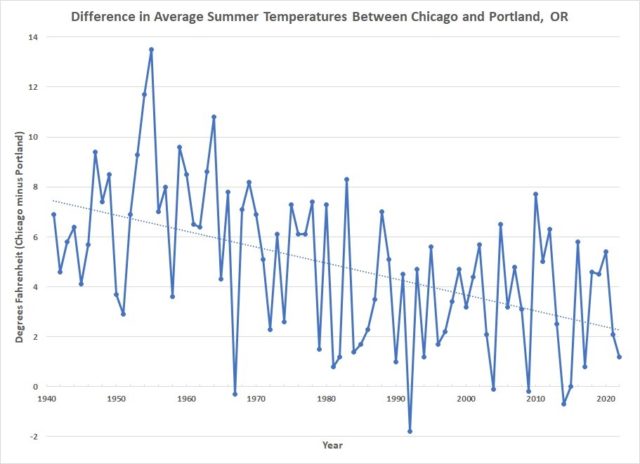 ForecastWatch analyzes accuracy of wind and temperature forecasts that can have impacts on energy demand and supply. Our data offers the ability to request customizable collections – by location, time period, and forecast parameters, such as wind and temperature – and have them conveniently delivered as easy-to-use CSV files. Contact us for more information.